Paris on the Brain

Ten days into my Paris trip, I achieved peak Frenchness: I found myself waiting in line with more than a dozen people for a humble baguette.

By chance, I arrived one evening at Landemaine (a beloved local chain of bakeries) around 7:45 pm. This landed me smack dab in the pre-dinner rush, when Parisians pass by their local boulangerie for a fresh-from-the-oven baguette. The latest batch would be out in five minutes, the boulangère assured us; was anyone here for anything else? One lone soul came forward; the rest of us were after crusty bread.

Minutes later, with absolute efficiency, 16 hot baguettes were handed out and silver euro coins handed over. I left with a piping hot beauty wrapped in thin paper, and did some requisite munching on the way home. 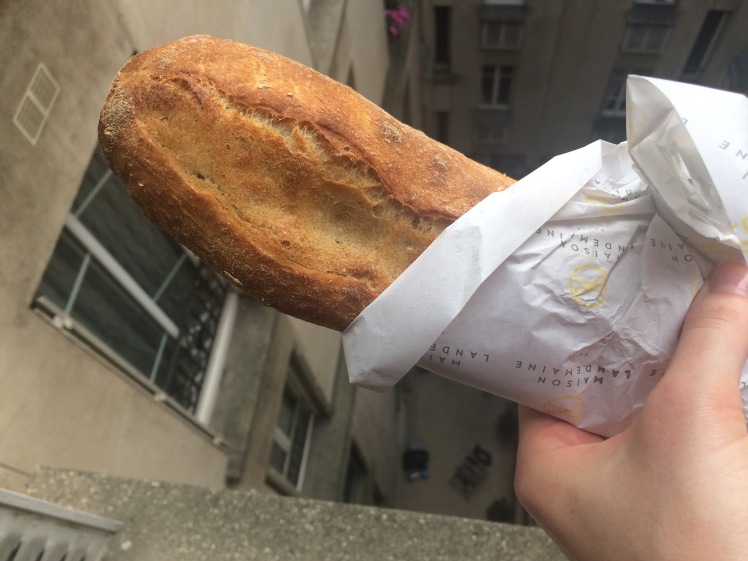 French life has a rhythm to it that is at once jarring and comforting to the foreigner. Ignore it, and you might find yourself standing outside a shuttered cheese shop or fishmonger, closed for a big chunk of the afternoon when locals are enjoying their lunches. Embrace it, and you feel like you’re moving through life on a communal wave: a quick coffee at the counter on the way to work, drinks before dinner, and hot baguettes around each meal.

(After-work drinks exist in North America, of course, but they’re nothing like the French version. During happy hour in Paris, sidewalk patios crowd, wine is savored, and—even if you drink as rarely as I do—the festive atmosphere is contagious.)

The rhythms of French life play out on a grander scale, as well. My trip to Paris coincided with the annual soldes, the sales that occur in stores after Christmas and in the summer. Think six weeks of Black Friday, where (a friend told me) people buy heaps of clothes and try them on at home rather than brave the mile-long fitting room lines. This happens like clockwork partly because it’s government-regulated: Stores must allow for returns and exchanges, and items on sale must have been sold at full price for at least a month prior.

I headed to a suburban mall for the first day of the soldes, thinking it wouldn’t be so bad. As Major Thompson would say, erreur. Shopping that day mainly consisted of waiting in lines: first the line for the fitting room, then the line for the cashier (then, in one case, the line for exchanges). One store actually invested in signage, the kind you might see at an amusement park: Wait from here: 20 minutes. My only emotional consolation during all the queuing was that, yes, indeed, I was having a cultural experience.

Perhaps from all the exhaustion of shopping (or managing the frenzied crowds, in the case of those poor store employees), the soldes are soon followed by summer vacation. The period of the congés eats up much of July and August and typically consists in escaping the city for more peaceful climates. Signs like these plaster storefronts around the city: 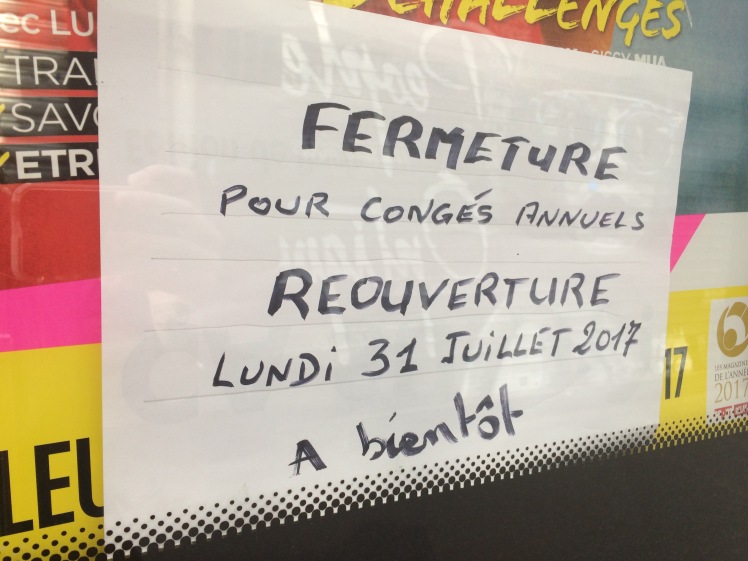 If city life has a rhythm to it, maybe we all have an internal rhythm, too, and how we feel in a given place depends on how the two sync up. Each of us might prefer a different ratio of work to play, of rest to activity, of solitude to togetherness; a different time to rise, to eat, to sleep. I came away from my trip feeling like Paris and I were on the same wavelength.